All About Ruby: July Birthstone

If you’re lucky enough to be born in the heat of July, you get the opportunity to celebrate your birthday during the sunshine-soaked days of summer and you can enjoy having a fiery birthstone with unique power. Extremely rare and almost as hard as a diamond, a ruby is one of the most precious of gemstones. Ranging from brownish red to almost magenta, rubies are not only breathtaking, they’re special for their healing and mystical powers. Here’s what you should know about these incredible gems.

Gems of the Sun

Rubies have long been associated with the sun, fire, and blood. (Makes sense that they’re the July birthstone, a month in which the Northern Hemisphere enjoys lots of heat.) Ancient legends about the gem maintained that rubies hold heat—people believed that if you tossed a ruby into a pot of water, the liquid would start to boil. It’s no wonder that the stone is known as a gem of passion.

The red hue of a ruby represents passion and energy, as well as fire and blood. As red is typically associated with masculine qualities, you could say that the July birthstone skews masculine as well. The shade of red a ruby bears is also significant. In the Middle Ages, rubies were used to predict and understand prophecies. People thought that a ruby would turn deeper red when danger approached.

Roots in Many Histories

Two thousand years of ancient documents show that India was once considered the source of all the world’s rubies, with the stone being revered in Indian culture; emperors would even personally welcome each gem that was found. The stone was also considered the most precious gem in the Bible and in Sanskrit writings.

A Celebration of Positivity and Strength

The power of a ruby lies in its ability to conjure power, courage, and positivity. It’s thought to make the mind sharp and help foster concentration. It’s also a stone known for bringing people together and helping them solve disagreements or controversies. Ancient folklore maintained that anyone who had a ruby would be fearless and lucky in life.

Rubies have been thought to cure all sorts of ailments, from liver problems to accidental poisoning. They were used to restore vitality, calm the body and stimulate the reproductive organs. Some people even believed that rubbing rubies on their skin was an anti-aging remedy to create a more youthful appearance. Because of their association with blood, many also believed the gems detoxified the blood and helped the body’s circulatory system function more efficiently.

The July birthstone is all about passion, so it’s no surprise that it has some sensual powers. Rubies are thought to deepen relationships and connections, even in long-distance romances. It was also believed that rubies can help a couple maintain stamina and vigor during sex and increase the chance of pregnancy.

The “Island of Gems”

Today, most rubies are mined in Thailand. These stones tend to skew towards the darker side, with reds that almost look purplish. They can be found on the famous “island of gems,” Ceylon, which boasts lighter shaded stones. Marco Polo once remarked that these Ceylon rubies were the most beautiful, and should be the most treasured, on Earth. 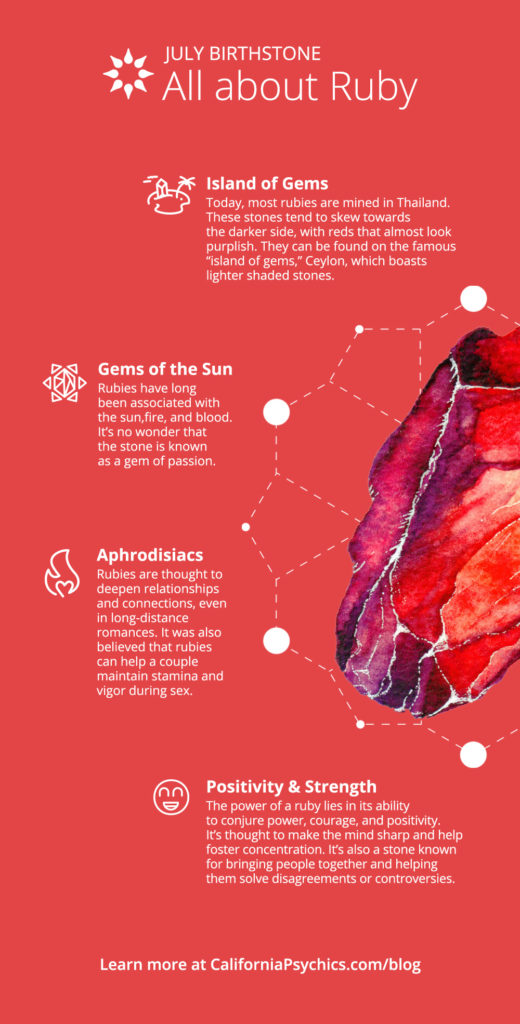 One thought on “All About Ruby: July Birthstone”

The Akashic Tarot: July 7-13
Top Summer Songs According to Your Zodiac Sign
Load More Tarot, Oracle & Angel Cards
Discover how you and your partner are in sync:
Your Sign

Do Not Sell My Personal Information

©2002-2021 Outlook Amusements, Inc. All Rights Reserved.
For entertainment purposes only. Must be 18 years or older.