All About Opal and Tourmaline: October Birthstones

For those lucky people born in October, you get to enjoy not just one but two spiritually-charged birthstones to fuel and inspire you all year long. Opal and tourmaline may not be the most precious of gems, but their mystical and healing properties make them valuable nonetheless. (Plus, they look downright amazing when set into jewelry and in their raw forms.) Here’s what you should know about these rainbow-hued stones and how you can incorporate their purported powers into your everyday life.

This glittering gem is made when water and silica meet, making rain a crucial component for its formation. Opal is usually found near the surface of the earth in places where there used to be ancient geothermal hot springs. It’s fitting that the ancient Greeks used to believe that opals were formed by water as well. They thought that the stones were created when the ancient god Zeus cried tears of joy upon defeating the Titans. (Fun fact: The word “opal” in Greek means, “to see a change.”)

Opal is far out—like, really, really far out. In July 2015, NASA announced that opal had been found on Mars, making it one of two gemstones discovered in outer space. (Peridot has also been found on the red planet.)

Because of its array of colors, opal was once known as a great signifier of luck—the thought was that all the gemstones’ hues were represented in one, making opal extra potent and powerful. However, the tides turned at some point, aligning opal with the evil eye—and all the negativity that comes with it. In this case, you have to see for yourself what the stone brings.

Opals were used in the Middle Ages when people believed that their healing powers could strengthen eyesight. Another interesting application, but less medical in nature, was that blonde-haired girls used to wear opals in their hair to protect their fair strands. The thought was that the stone would help them retain their coveted hair color and keep it from turning darker.

According to legend, tourmaline passed through a rainbow to make its way to earth—fitting since the stone comes in almost every color imaginable. Tourmaline can be red, yellow, pink, dark green, bright blue, blackish blue, dark brown, and colorless. Because of this, many confused tourmaline for other gemstones, like rubies and emeralds, over the centuries. It wasn’t until the 1800’s when scientists realized this stone is actually its own mineral.

One of the more rare and special varieties is the “watermelon tourmaline,” which—just like the fruit—has a green outside and a bright pink inside. Today, labs can create bi-colored tourmaline but coming upon one naturally means that you’ve found a seriously exceptional stone.

Tourmaline is pyroelectric, meaning that when it’s heated it has the capacity to possess a positive charge on one end and a negative charge on the other, making it able to attract small objects like wood shavings. It’s also piezoelectric, which means that scientists can induce an electric charge by applying pressure to the stone in the direction of the vertical crystal axis. The gem has been used in pressure gauges and submarine instruments because of this capability.

This gem has vast spiritual powers, including the ability to enhance concentration, understanding, communication, and creativity. It’s also been reported to boost self-confidence, neutralize negativity, and increase psychic capabilities. As a healing stone, tourmaline is believed to provide relaxation for the mind and the body, calm the nervous system, and treat anything from anxiety to heart disease. 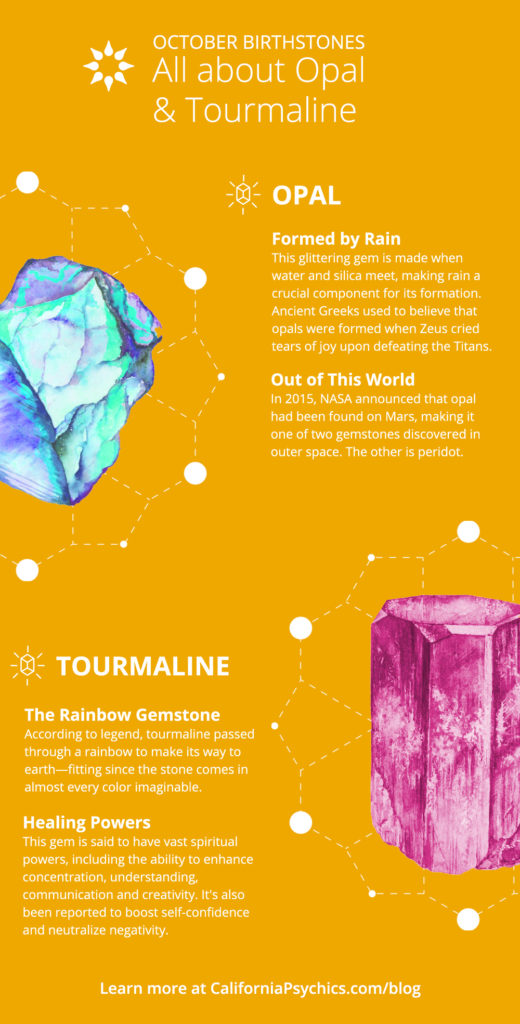 You have a life purpose. Wondering what you’re meant to do? You won’t know until you get a life path reading with one of our talented life path psychics. A life path psychic can help you find what you love so you can love what you do.

One thought on “All About Opal and Tourmaline: October Birthstones”

Cat’s Eye Tarot: October 6 – 12
Self Talk: Using Positive Affirmations for Change
Load More Tarot, Oracle & Angel Cards
Discover how you and your partner are in sync:
Your Sign

©2002-2020 Outlook Amusements, Inc. All Rights Reserved.
For entertainment purposes only. Must be 18 years or older.

Get your personalized FREE daily horoscope