All About Peridot: August Birthstone

Featuring a spectrum of brilliant green hues, the peridot is one of the most overlooked gemstones, yet its history and healing properties are worth some attention. Peridot can bring happiness, light, and health and those who are lucky enough to have been born in the month of August should wear this stone with pride. Read on to learn more about this dynamic gem.

Peridot is one of the oldest known stones, as records show it was mined as early as 1500 BC. In those times, most of the world’s peridots were found in Egypt, where the stone was known as the “gem of the sun” and used as a talisman against evil spirits. And while we often associate famous Egyptian queen Cleopatra with her trove of emeralds, some accounts show that she actually adorned herself with peridots—people recording history at the time simply mistook the gems for their darker green cousin since they’d never seen peridots before.

While most gemstones are found in the earth’s crust, diamonds and peridots are created much deeper down in the mantle. In fact, peridots form in the magma of volcanoes and it typically takes tectonic activity for them to surface high enough to be mined. So, where there are volcanoes, there are usually peridots, too.

Long ago, the stones were mined at night because it was said that it was easier to see the green gems in the moonlight. Today, the stones are mined all over the world, including in the United States, specifically Arkansas, Arizona, Nevada, and Hawaii.

While some precious stones come in an array of hues, peridot is always shades of green, from olive to pale, lime to yellow-green. The rarest and most expensive stones are lime green with no brown or yellow tinges. They’re typically set in white gold or platinum to provide contrast and let the stone really shine.

Long ago, peridot was used to ease asthma and as a remedy for fever. Today, it’s thought that peridot can strengthen the immune system and metabolism, cleansing the body of toxins. It can also help clear the heart, lungs, gallbladder, and intestinal tract. Interestingly, the stone has also been used to treat hypochondria.

In addition to clearing the body of toxins, peridot is thought to cleanse the mind. It supposedly relieves feelings like resentment, jealousy, and bitterness, as well as alleviates stress and anger. By opening the mind to new awareness and accountability, it encourages people to take responsibility for their own lives and their own happiness.

The Vitamin D of Crystals

Since the gem has been long associated with the sun, it makes sense that peridot lore has evolved into a belief that it promotes happiness, optimism, and light-heartedness. If you’re looking to embark on a sunnier path, see the good in a given situation, or just feel cheerful, this is the stone you need. Fittingly, peridot has also been associated with easing depression. Carrying a stone in your pocket or wearing one around your neck is thought to ward off negative energy and boost self-esteem. 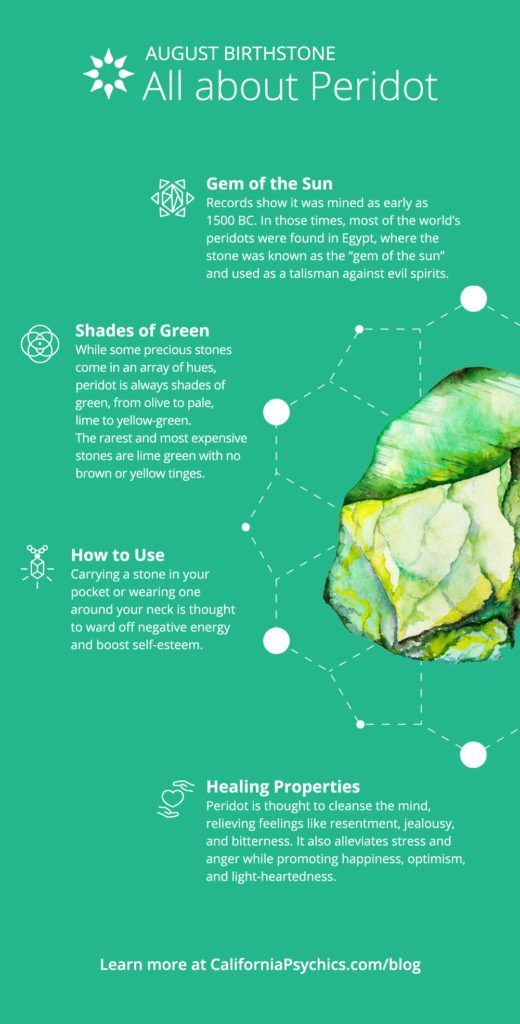 You have a life purpose. Wondering what you’re meant to do? You won’t know until you get a life path reading with one of our talented life path psychics. A life path psychic can help you find what you love so you can love what you do.

One thought on “All About Peridot: August Birthstone”

A Day in the Life: Psychic Cameron
Psychic Q&A: Love and Addiction
Load More Tarot, Oracle & Angel Cards
Discover how you and your partner are in sync:
Your Sign

Discover how you and your partner are in sync:
Your Sign

©2002-2020 Outlook Amusements, Inc. All Rights Reserved.
For entertainment purposes only. Must be 18 years or older.

Get your personalized FREE daily horoscope